URGENT NEED: Help us secure funding for victims of crime

We need you to help us reach out to Congress about Victims of Crime Act (VOCA) funding, which is in danger of serious and long-term cuts unless we act as a movement to stop it. 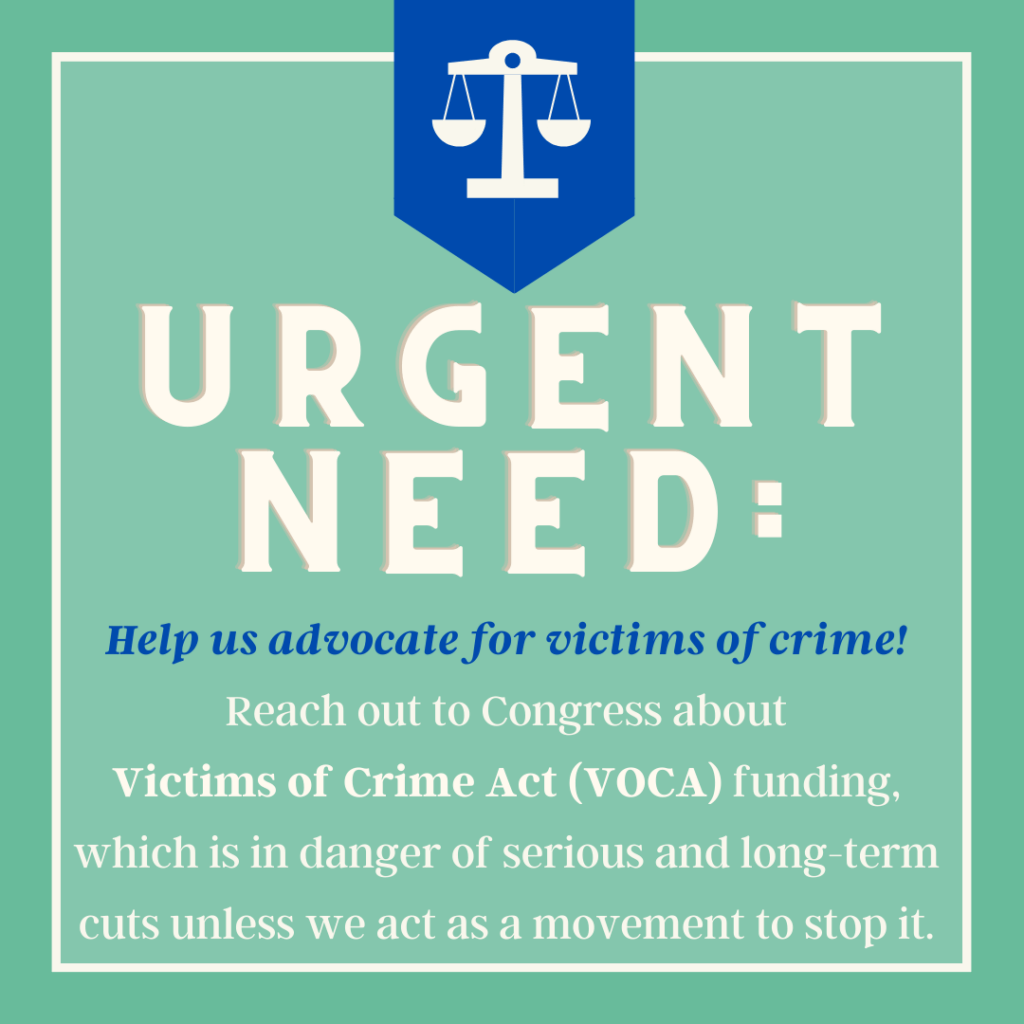 What is VOCA?
The Victims of Crime Act (VOCA) was signed into law in 1984 and was created to assist and compensate victims and survivors of crime. One of the most underrated but important aspects of the bill is that the funding comes from federal criminal fines, forfeitures, special assessments, and the like—in other words, not from tax dollars.

Right now, there are two issues before Congress that need your attention: proposed cuts to VOCA, and the need for a “VOCA fix.”

Proposed cuts to VOCA
There are two funding proposals currently under consideration, one in the House and one in the Senate: The House is proposing funding VOCA at $2.65 billion, which is closer to the current funding level. The Senate, on the other hand, is proposing funding at only $1.5 billion for VOCA for this year—more than a billion dollars in cuts. Members of Congress are deciding right now what the final number will be. We need you to urge your members of Congress (your representative in the House and your two senators) to fund VOCA as fully as possible. CACs use VOCA funds to pay for victim advocates, forensic interviewers, and medical and mental health services. Any cut in funding will result in fewer kids getting the help they need.

The “VOCA fix”
As noted above, VOCA funds are non-tax dollars that arise from criminal convictions. But as we all know, not every case ends in a conviction—some cases result in deferred prosecutions or non-prosecution agreements but still carry monetary penalties. However, the monetary penalties in deferred prosecutions and non-prosecution cases are not currently included in the VOCA fund. The “VOCA fix” would allow for such penalties to be included—and would go a long way toward stabilizing the fund. Ask your member of the House and your senators to support a permanent solution—so these funds are not in jeopardy every year—by fixing it so that all monetary penalties from federal prosecution settlements flow into the VOCA fund.

One of the great benefits is that our work has bipartisan support. Working to help child victims of abuse heal, recover, and thrive is not a Republican or a Democratic issue—it is a human issue.

Here’s how you can help:

My name is [your name and CAC name], and I am a constituent writing you from [your location]. At [CAC name], we are first responders in addressing child abuse by bringing together a coordinated team of experts in medicine, law enforcement, victim advocacy, mental health, and other disciplines to both hold offenders accountable and help children and families heal in a comprehensive, seamless way so no future is out of reach. Children’s Advocacy Centers (CACs), as well as other victim service providers for programs serving survivors of child abuse, domestic violence, sexual assault, trafficking, drunk driving, homicide, and other crimes, rely heavily on Victims of Crime Act (VOCA) grants. VOCA also supplements state victim compensation funds. VOCA grants are not taxpayer-funded; instead, VOCA is funded by monetary penalties from federal criminal convictions. As the Department of Justice is entering into more deferred prosecution and non-prosecution agreements, the money available for VOCA grants has dropped dramatically. As a result, grants for victim services were cut 25% last year, and victim service providers are facing further potentially catastrophic cuts in their VOCA grants in the coming year.

[If applicable, explain how cuts to victim services and victim compensation grants will impact your community. This is where you can include a proposed 40% cut to services.]

For this reason, we urge House and Senate appropriators to release as much as possible from the Crime Victims Fund in the Fiscal Year 2021 Appropriations budget. In addition, we urge including a VOCA fix that seeks to put VOCA grants on a more sustainable path. You may have already received a letter on this fix. Among other things, this fix redirects monetary penalties from deferred and non-prosecution agreements to the VOCA fund and increases the federal government’s contribution to state victim compensation funds.

As a constituent and as someone who cares deeply about victims and survivors, I urge you to take immediate action in support of the solutions included in the letter above.

If you have any questions, please contact [your name] at [your email] or Denise Edwards with National Children’s Alliance (dedwards@nca-online.org).